WASHINGTON—Moments ago, Rep. Mark Green sent a letter to Select Subcommittee on the Coronavirus Crisis Chairman James Clyburn (D-SC) calling on him to rescind his partisan attacks on coronavirus response efforts in Tennessee and in three other states led by Republican governors.

Green said, “I am writing to you expressing my severe concern over your letters to four states led by Republican governors, including my home state Governor Bill Lee of Tennessee. The White House Coronavirus Task Force report has 21 states listed as being ‘in the red zone.’ Yet, for some reason, only four of these states, all with Republican governors, were on the receiving end of your letter.”

“Tennessee’s leaders, from the Governor to county health departments and school boards, have worked tirelessly to respond to this pandemic since Day One. Whether or not one agrees with each decision made, the Constitution does not grant you or this Committee any right to selectively harass certain states led by governors of the opposite political party.”

“Why have you not requested the same documents from Democrat-led states with an explosion of cases, such as California, or states that have botched their response like New York? Your letters today reek of partisanship. It is wrong to capitalize on a pandemic by playing political games. I urge you to rescind your requests to these states so that they can focus on what is most important: protecting our people.” 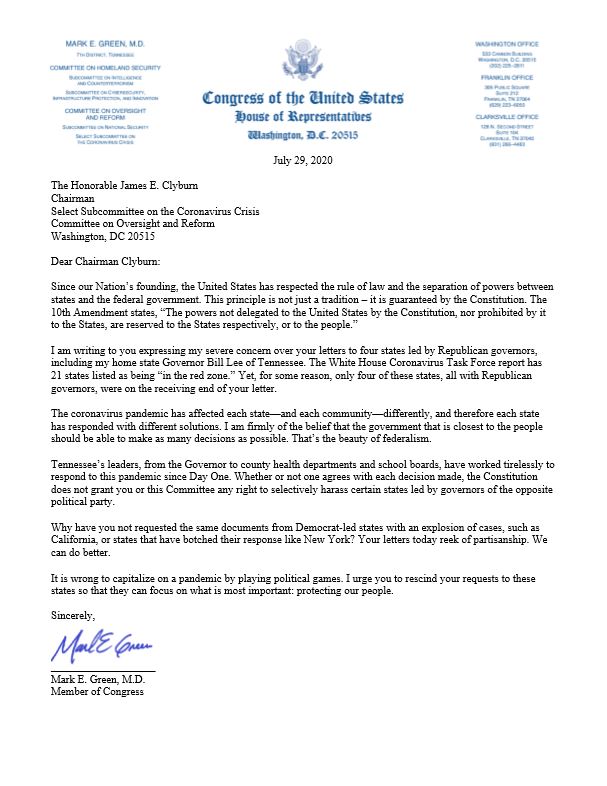